Religion and Incarceration: A conversation with Winnifred Sullivan and Julio Medina

Featuring a conversation between Winnifred Sullivan and Julio Medina, this talk will focus on religious mobility within confined spaces, focusing on religious conversion within the American penal system. This conversation will not only explore the complexities of conversion within prisons, but also the ways in which religious faith -and activism- are integral components of the modern prison-industrial complex. Moderated by Brett Dignam, Clinical Professor of Law at Columbia Law School.

Winnifred Sullivan is Department Chair and Profess of Religious Studies at Indiana University, Bloomington and Affilliate Professor of Law at the Maurer School of Law. She is the author of Paying the Words Extra: Religious Discourse in the Supreme Court of the United States (Harvard 1994), The Impossibility of Religious Freedom (Princeton 2005), and Prison Religion: Faith-based Reform and the Constitution (Princeton 2009). Julio Medina is the Executive Director/Founder and CEO of Exodus Transitional Community, Inc. Under his leadership, Exodus Transitional Community (ETC) has served over 3,000 men and women and has become one of the most successful re-entry programs throughout the country. Professor Brett Dignam joined the Columbia Law School faculty in 2010.  She came to Columbia from Yale Law School, where she led the Prison Legal Services, Complex Federal Litigation and Supreme Court Advocacy clinics. An award-winning teacher, Professor Dignam has supervised students in a broad range of litigation matters and has designed and overseen workshops conducted by students for prisoners at the Federal Correctional Institution in Danbury, Connecticut on issues including immigration, sexual assault, and exhaustion under the Prison Litigation Reform Act. She has participated in major litigation in over 30 federal and state cases in the area of prisoners’ rights.

Fencing in God? – Religion, Immigration, and Incarceration is a semester-long series of events focused on the ways in which religion and mobility intersect with immigration and incarceration. Throughout the Spring 2013 term, the IRCPL will present three public lectures with scholars and activists, three related film-screenings, and three lunch-time discussion sessions intended to facilitate and encourage long-term discussions around the topics of religion, immigration, and incarceration.

Fencing in God Film Series: Broken On All Sides

Wednesday, March 6th, 2013, 6pm-8pm
613 Schermerhorn
Please join us for a screening of Broken On All Sides. The documentary centers around the theory put for­ward by many, and most recently by Michelle Alexander (who appears in the movie), that mass incarceration has become “The New Jim Crow.” That is, since the rise of the drug war and the explosion of the prison population, and because discretion within the sys­tem allows for arrest and prosecution of people of color at alarmingly higher rates than whites, pris­ons and criminal penal­ties have become a new ver­sion of Jim Crow. Much of the discrimination that was legal in the Jim Crow era is today illegal when applied to black people but perfectly legal when applied to “criminals.” The prob­lem is that through subjective choices, people of color have been tar­geted at significantly higher rates for stops, searches, arrests, prosecution, and harsher sentences. So, where does this leave criminal justice? Through inter­views with people on many sides of the criminal justice system, this documentary aims to answer questions and provoke questions on an issue walled-off from the public’s scrutiny.
The screening will be followed by a discussion with Laura McTighe. Laura is a Ph.D. student in North American Religions at Columbia University.  She earned her M.T.S. in Islamic Studies from Harvard Divinity School in 2008, and her B.A. in Religion and Peace & Conflict Studies from Haverford College in 2000. Her research centers on lived religion, migration, and well-being, informed by an anthropology of social suffering and structural injustice.  She is particularly interested in how these themes are negotiated and subverted by formerly incarcerated and convicted people’s movements in the United States.  Laura’s research has unfolded in consistent conversation with her work to support community-led responses to the twin epidemics of mass imprisonment and HIV/AIDS.  Her writings have been published in Islam and AIDS: Between Scorn, Pity and Justice (2009), the International Journal for Law and Psychiatry (2011), Beyond Walls and Cages: Bridging Immigrant Justice and Anti-Prison Organizing in the United States (2012) and a variety of community publications.  She currently serves on the boards of Women With A Vision in New Orleans, Men & Women In Prison Ministries in Chicago and Reconstruction Inc. in Philadelphia.

This event is free and open to the public. 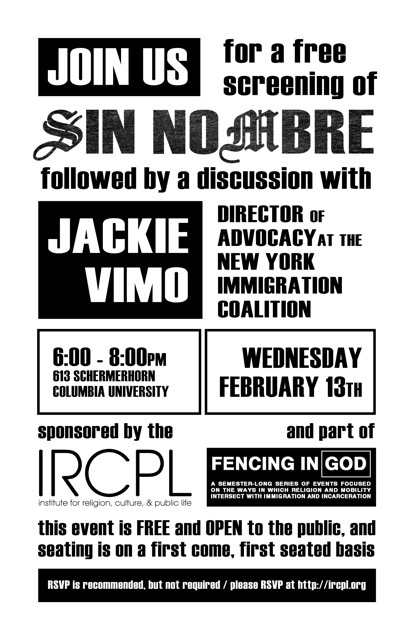 Posted by Unknown at 9:08 AM No comments:

Alyshia Galvez on Guadalupan New York: Activism and Devotion among Mexicans in NYC

Tuesday, February 12th, 2013, 6-7:30 pm
Room 707, International Affairs Building 420 West 118th St, NY
Alyshia Gálvez is a cultural anthropologist (PhD, NYU 2004) whose work focuses on the efforts by Mexican immigrants in New York City to achieve the rights of citizenship. This talk asks: How do spaces of devotion become spaces of activism? What role does faith play in the construction of civic spaces and civil society among recent immigrant groups? What are the limitations of these forms of social mobilization? This talk will explore a decade of Guadalupan-based devotion and activism for immigration rights among recent Mexican immigrants in New York City. Based on Gálvez’s extended ethnographic research in New York City and many years of activism and advocacy, she will reflect on the changing immigrant rights movement and its intersection with faith based institutions and organizations. 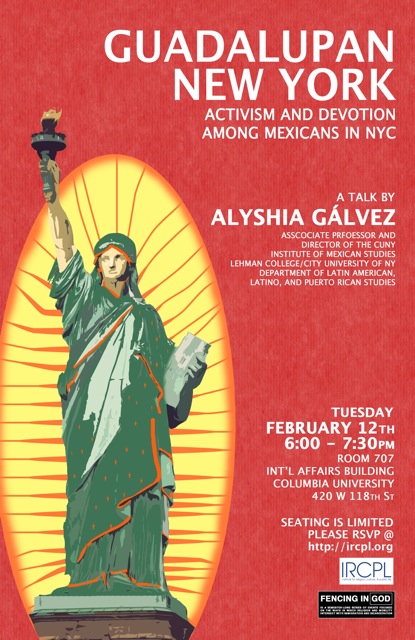 Seating is limited; please RSVP here.
Posted by Unknown at 9:07 AM No comments: